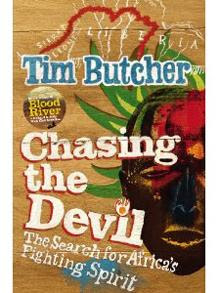 I've never read a single thing about West Africa before. I watched Blood Diamond but unfortunately the fact that it was set in Sierra Leone is one thing that I completely missed. I've heard the name Charles Taylor somewhere. What I'm trying to say: When I started reading Tim Butcher's new book, Chasing the Devil, I didn't have a clue what I was going to find.

Chasing the Devil is the record of the trek Butcher took through Sierra Leone and Liberia, following the same path that the author Graham Greene took in 1935 with his cousin Barbara. Greene's book Journey Without Maps is about this trip. When the Greenes went on their journey, Sierra Leone was still run by the British colonial powers, and Liberia was still run by the African-American elite. It was before any of the coups, before the civil wars, before the upheaval, before the unbelievable violence that has taken place over the last thirty years or so. So in many ways it was a very different place. But in many ways it is the same.

The book is not only a record of the expedition. Before Butcher and his travel companion David Poraj-Wilczynski even got going on their long walk, I felt I was given a brief, sophisticated overview of all the crucial facts about the history of these two countries. It didn't feel like I was reading a dry history book, but a racy, action-packed story of tragedy and hope and more tragedy. I became acquainted with Butcher's career as a journalist for the Daily Telegraph and his past experience in this area of the world, covering the end of the Charles Taylor regime and a whole bunch of other things too. I admit to wondering as I began reading this if the trek was ever going to happen, but as the book went on it became very clear that everything needed to be there.

It's also a book that is about books. Butcher really brings the Greenes to life. He delves into a number of other books, too, which have been produced over the last few centuries by other European travellers to West Africa. One of my favourites, and one which I have already put a request on in the local library, is described here:

Perhaps my favourite early Liberian explorer was an adventurous aristocratic Englishwoman, Lady Dorothy Mills, who completed an impressively arduous trek in the mid-1920s, described in her book Through Liberia. It is full of the effortless insouciance of the early white outsider in Africa.
'The climate of Liberia is . . . quite healthy as long as you have a well proofed and ventilated house, and do not go out in the heat of the day, and do not take a stroke of unnecessary exercise except in the very early morning, maybe, or during the hour before sundown to give you zest for your cocktail and cold bath,' she wrote after being carried by hammock for hundreds of miles through the jungle.
In spite of this occasional gaucheness, she was clearly a formidable traveller. She lost her last cigarette papers in a swamp and took to rolling her tobacco in pages torn from her notebook, making roll-ups that would burn so fast they singed her lips. When she ran out of dried biscuits, she ate foie gras with banana, and when she irreparably damaged her sun umbrella by bashing one of her hammock bearers over the head, she took to stuffing the back of her blouse with banana leaf fronds that were so large they would reach above her head to cast shade.

However, it is really about Butcher's trip through the African jungle, following the Greenes, and the trip is absolutely fascinating. Encounters with corrupt officials, encounters with village people, encounters with dancing "devils", encounters with isolated mission workers, encounters with the sinister local spiritualism which has such a firm grip on the Liberian interior... As he writes and as I read, I could almost feel the intense heat the small party of travellers had to deal with, and all their exhaustion.

Butcher writes with humour and grace. This is definitely an enjoyable read, much of the time. But it is also a discussion of some of the darkest, most gruesome deeds that have taken place, whether in the political conflict across both countries or in the much less well-known but equally real ritualised murders taking place in the background.

It's a discussion about the formidable weight of history on these countries, the horror of which is very, very fresh. And I can't say I finished the book with any great sense of optimism (although I'm not saying I came out of it weighed down with depression) - so it surprises me that there is a commendation on the back by Archbishop Desmond Tutu: Chasing the Devil shows the power of good to prevail over evil. Where once there was cruelty and conflict in Sierra Leone and Liberia, Tim Butcher finds grounds for hope. An inspirational account of humanity's wonderful spirit to survive.
As much as I would love to feel the same way, I find myself, with the author, nervous about the future of these two countries. This doesn't mean there is no hope. West Africa has clearly come a long way. Many of the individuals who appear in the book are strong, clever, promising, driven people it's impossible not to like. Any country would be lucky to have them. But the divisions which produced conflict are still there, the strength of the spiritualist leaders remains undiminshed, and corruption pervades the administration.

I don't think I'm selling this book very well. I don't think I can reproduce in one review all the features which I loved. All I can say, to finish up, is that this is the most intriguing book I've read in a while. A really, really wonderful book, about fascinating things. I would absolutely recommend this to anyone. If you're stuck, unable to think of a present for that difficult family member - this is it. (It would also be a great Christmas present for the family members who aren't difficult too!)

I give it four stars. I know I haven't been writing this blog for very long, so you will be unacquainted with my standards, but I assure you that I am determined to give ratings that high only to very good books. Loved it.
Posted by Allie at 6:32 PM