I am so very overly excited to hear that Baz Lurhmann is filming a new version of The Great Gatsby, due to be released in 2012!

Sometimes I am not excited to hear about interpretations of my favourite novels, especially when they have already been made into a perfectly good movie. In this case, one look at the cast was enough to drive up my expectations.

I loved the earlier film, made in 1974. There were a few things that annoyed me about it. It seemed to move quite slowly and it didn't always capture that sense of dazzling excitement of some chapters of the novel. I'm not sure that Nick Carraway's narration always worked - always the problem with adapting a first-person observer novel. However, there was something about it that clicked. The cast was excellent, for one thing.

Robert Redford, and Leonardo DiCaprio, as Jay Gatsby.
Now that I've heard that Leonardo is Gatsby, I wonder if anyone else could possibly have been cast in that role. He just seems to be the perfect fit. My fingers are firmly crossed that he will bring to the role that handsome pleasantness that Gatsby needs but also the fierce hidden longing. The determined optimism. And that sense of unknowability, if that is a word - the sense that he is slightly too smooth. 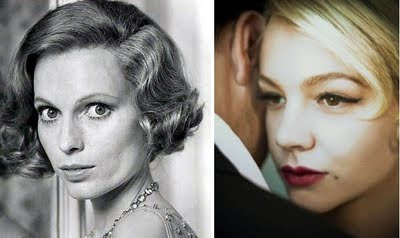 Mia Farrow and Carey Mulligan, as Daisy Buchanan.
Mia Farrow was my favourite thing about the older movie. She captured Daisy's charm. She was like champagne, a butterfly, fragile and effervescent. But she also perfectly captured Daisy's famous carelessness. I feel optimistic that Carey Mulligan will also be able to bring her own unique interpretation of Daisy to the role.

Sam Waterston and Tobey Maguire, as Nick Carraway.
Tobey Maguire seems to be another excellent casting - Nick is such an important character, and he seems to have all the necessary requisites. He does well in roles that are slightly idealistic, slightly invisible, upstanding without being moralistic, and very likeable. 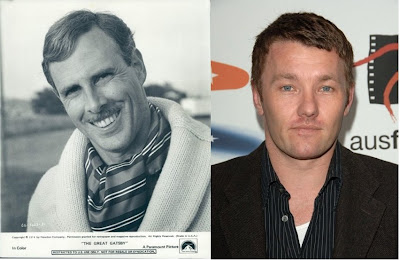 Bruce Dern and Joel Edgerton, as Tom Buchanan.
I've never seen Joel Edgerton in a movie, but I feel optimistic just looking at him. I always felt that Bruce Dern's Tom was a little too comical. In the books there is that element in his character, but he also seems slightly more sinister to me. Joel Edgerton will (hopefully) bring an extra edge of arrogance and chauvinism to his portrayal of Tom. (And if you happen to read this, Joel, I don't mean to say that you look particularly chauvinistic and arrogant!!!) 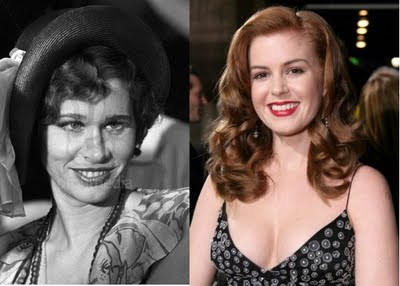 I will be really interested to see how the filmmakers deal with the more minor characters such as George Wilson or Jordan Baker. But so far the casting looks excellent, and the only thing I am sad about is that I will have to wait all the way into next year to see this movie.
Posted by Allie at 1:03 PM