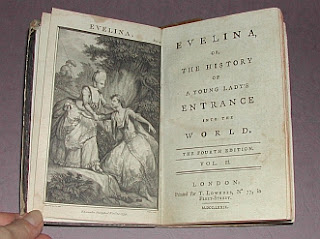 I have just finished reading Fanny Burney's Evelina for the first time, and I found it highly enjoyable.  One of my new year's resolutions this year was only to read really good or really fun books, and this was not a bad place to start.

I struggled a little bit with Evelina's extreme delicacy and tendency to confusion, swooning, inability to act like a normal person in public, etc.  I was more than a little frustrated at her constant sense of duty to everyone else's opinion, and then the fact that she would blame herself when what they said turned out to be a bad idea.  The setting was one where every woman is an angel or a harlot, where intelligence in a woman is viewed with extreme suspicion, where the good characters all seem to be a little bit dull and the bad characters are roundly condemned but much more interesting, although the author doesn't appear to realise this.  I struggled with it, but I enjoyed it as an interesting historical experience.  It was a lesson in appreciating the feminist movement and the changes of the last couple of centuries, and I enjoyed it as a novel, a rollicking read.  This blogger puts it well:

Somehow, it did not bother me as I would have expected. Yes, I wanted to thoroughly shake Evelina every once in a while, tell her to open her eyes and not be so gullible. And oh yes, I even considered slapping her. But all in all, I could not help but be entertained.


As the blogger points out, quoting an introduction written by Edward Bloom, this novel is at least an improvement on a familiar theme:

“In this kind of feminocentric novel, the transition from innocence to experience is conceived not as a fall, but as a narrative of progress and understanding.”


So at least it allows Evelina her (slight) growth as a character without lamenting a loss of womanhood.

It was also a really excellent experience to read something that was in Jane Austen's school of novel-writing, and to really see how wonderfully different Austen's female characters are.  I've always liked them for their independent, clever streak, but I don't think I'd realised how unusual that was for her day and age.

Which leads me to another point - I suppose I have learned satire from Jane Austen, because I struggle with the label of 'satire' being placed on this book.  Yes, it is apparently satirical.  Maybe I am misunderstanding the word somewhat?

Yes, there are a number of characters that appear rather ridiculous, but we see them all from Evelina's rather insipid (though very nice) point of view and so the book seemed to me more Moralistic than Satirical.

But then again I seem to be in disagreement with a number of people - according to this blogger, Evelina is a 'ruthless' character:

Evelina is described throughout the novel by many characters as being innocent, but in fact she is anything but. She is, indeed, quite coldblooded in using her both her femininity and her youth to her advantage to achieve her aims. Evelina is a manipulative young lady who routinely censors what others say when relaying the meaning she wishes to convey.


I really don't see it.  Another blogger doesn't see it:

Evelina the character is boring. She’s passive, she’s perfect, she’s dutiful, she’s self-effacing. She doesn’t seem to have a mind of her own. Her story at the end of the novel is entirely predictable.


This other blogger writes, on a slightly different tack, with a slightly more complex impression:

The story of Evelina is the story of a young girl learning her place in society and grappling with keeping her identity while attempting to fit into the culture of the time.  ... Evelina attempts to con-temporize her self-image while attempting to belong in society. The forces of social convention weigh so heavily upon her, Evelina thinks “…there ought to be a book, of all the laws and customs a-la-mode, presented to all young people, upon their first introduction into public company” (Burney XX: 84). This statement shows the character’s desire to conform to social convention and alter her self-image so as to belong in the crowd. The willingness of the main character to change herself, rather than have people accept her for her faults, shows that the author thinks the force of social convention is stronger than that of free will.


It was really interesting to me to see how different an impression different people have taken from this novel.  If that's possible, maybe my first reading was not so discriminating.  Maybe it is possible to read it in a whole myriad of ways.  I'm sceptical... but I will read it again one day, and maybe I will see something more.
Posted by Allie at 4:47 PM

Email ThisBlogThis!Share to TwitterShare to FacebookShare to Pinterest
Labels: 18th century, austen, classics, three and a half stars