a little coffee shop in Kabul 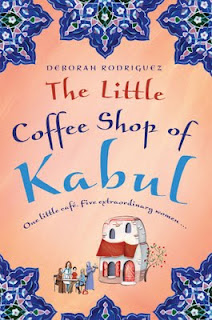 [Australia/New Zealand cover]
I have just finished reading The Little Coffee Shop of Kabul, by Deborah Rodriguez - otherwise known as A Cup of Friendship in the US of A. (An aside: why do books get published with different titles for different locations? I have been trying to understand, and no good reason occurs to me!)

Set in a city which sits constantly in the shadow of the threat of violence, this is a novel based on experience. Deborah Rodriguez first went to Afghanistan in 2001, and stayed on, eventually starting the Kabul Beauty School, as well as her very own coffee house. She married an Afghan man, finding out later that she was his second wife. After she wrote a memoir about her experiences in Kabul, rumours spread that she had, proverbially, Made It, and as plots and threats began to abound, she was forced to leave the country, returning to her native USA.

This book is fiction, but it could only have been written by someone who really knew what it was to live in Kabul as an expat, but had also gained some insight into the life of Afghan women. It is about five women who gather at the coffee house, who become family to each other in an environment normally so stark and unforgiving to women.

Sunny, the proprietor, who worries about keeping her customers safe and about the choice she needs to make between two men in her life. Yazmina, a young pregnant widow who was kidnapped from her northern home and abandoned in the streets of Kabul. Candace, an outgoing American who left her diplomat husband to raise funds for Wakil, a wealthy Afghan philanthropist. Halajan, the sixty-year-old owner of the building, whose secret love affair seems destined to failure. And Isabel, the British journalist, who is beginning to discover her passion for helping Afghan women.

I thought this was a good read. It's very interesting. I feel introduced to a place and to people whom I could never have imagined before, in a way that news stories or imagination alone cannot, and isn't that one of the fundamental purposes of literature? Rodriguez is very sympathetic to the people she writes about - every individual Afghan character is developed and complex and positive in some way - and to the country and the city she is describing. It has moments of beauty and goodness unimaginable in a Western context. And yet, at the same time, the reader is constantly aware of the feeling of restrictedness that life in this city presents, for women, for someone who has done something culturally unacceptable, for Western expats.

It's also a good read in the sense that it promises a rollicking plot, attractive characters and juicy sub-plots. It doesn't fall into the trap of politicising everything. I have to admit, it's no great contribution to the canon of modern literature. The characters sometimes seemed a bit vague, too. So, it has faults. All the same, it's a solid effort, a good novel, an enjoyable and eye-opening read. I would recommend it to anyone who likes chick lit with serious currents. Three stars from me.

Ooh, I almost forgot to mention one of the cool features of this novel. It comes with tips for a Little Coffee Shop themed book-club event, including recipes, which is a great idea, I think. Some of the delicacies on offer are Afghan dishes such as baklava with saffron rosewater syrup, delicate butter cookies, and sweet bread, with drinks idea such as chococino coffee and cardamom tea. They sound exceedingly attractive! 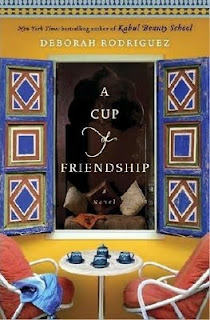