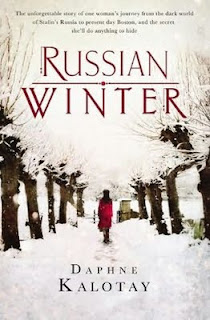 My first impression of Daphne Kalotay's first novel, Russian Winter: Its absolutely beautiful cover. Something about the way a woman in a blood red coat is walking away from the reader along an aisle of trees, almost disappearing into the snow - it intrigued me. I normally feel a little reluctant to read thick books, like this one, but nothing like that on this occasion - I just wanted to start reading. This is definitely a good use of design.
Fortunately, this is a book that deserves the anticipation its cover produced. I loved it. I am so impressed that this is a debut novel. (Kalotay has also published a book of short stories.) There are so many reasons to love it.
Russian Winter is a story set into motion by a jewellery auction in Boston in the present day. Nina Revskaya was once a prima ballerina of the Bolshoi Ballet in Moscow, and now grows old in Boston, still an icon of the dance world. She decides to auction off her extensive collection of jewellery for charity. Unexpectedly, an anonymous donor comes forward with an amber necklace that he claims is from the same set as some of her jewellery. Slowly, an astonishing story unfolds. It unfolds through Revskaya's memories of her life in Stalinist Russia and her marriage to Soviet poet Viktor Elsin, before her defection to the West. This is interspersed with the present-day detective work of Grigori Solodin, the donor, and Drew Brooks, an auction house associate.
It is a fascinating story. It is a historical novel that seems effortless, unlike so many of the genre. It is beautifully researched - as a student of Soviet history, nothing stood out for me painfully - everything flowed as if it were the record of a true story, narrated by someone who lived it. It is the perfect fusion of historical drama with a strong story based around individuals, whose lives take place in a historical situation but revolve around personal relationships. I approve very, very highly. Another thing I really admire is that Kalotay manages to humanise the victims of the Stalinist terror. To give them a fictional face.
It is also a wonderfully-paced story - something that historical novels don't always achieve. I can't remember a single moment in this book in which I wasn't completely engrossed. Most nights this week, I suddenly realised it was past midnight and I should probably go to bed, after what seemed like only half an hour of reading, tops. This is a love story, with a secret. Kalotay masterfully draws out the plot, revealing bits and pieces, in this work of literary detection. She also manages to weave in some compelling sub-plots in a completely satisfying way, such as the personal lives of Grigori and Drew. There are clues from the beginning about what is coming, and yet contradictions emerge - finally, the end completes everything, even as it turns some expectations upside down. It is incredibly satisfying, and very enjoyable.
Kalotay also writes really well, without any sort of pretension but with skill and fluency. It is a very readable novel. Her characters are full-bodied, and they are written with perception and sympathy and much imagination. I felt they were real. Her poet, her composer, her ballerinas are all fictional. But I felt like googling them after I had read about them!
This is a must-read. I enjoyed everything about it. And so I am giving it my highest rating ever: four and a half stars.
Posted by Allie at 3:07 PM

Email ThisBlogThis!Share to TwitterShare to FacebookShare to Pinterest
Labels: four and a half stars, new releases