I have to confess that when I first saw this story on the BBC News website I was appalled.

"Is Jane Eyre a feminist icon?" the headline asked.  Then the text read 'The writer Beatrix Campbell praised the new production for aiming to "rescue" the book from becoming "a late 20th century Fifty Shades of Grey" in which "a poor girl meets a rich brute and falls for him".'

I was totally appalled because I couldn't believe anyone would try to "rescue" the book or question the feminist significance of it.

Then I listened to the podcast and realised I had got muddled - it's actually about rescuing Jane Eyre from the MODERN interpretation of the book, which emphasises the passionate love story over  Jane's character, grit and resilience.  Instead, the play they are talking about is a life story, not a love story - like the book.

Have a listen.  It's good stuff.

It reminds me of an article I read on Jane Eyre the film, by a certain male film critic who decided the film adaptation supported his idea that Jane Eyre is no feminist role model.  Interesting, given the comments above.

Anyway, what I remember about the article is not this critic's nebulous reasoning.  It's a comment that someone wrote underneath it which I've always been quite pleased by.  I think pleased because someone else had put into words my own feelings about the book, feelings that I had never expressed half as well.  Jane Eyre is a novel that tends to bring out different reactions in everybody who reads it, and so it's rare to find that someone else feels the same way.  You may feel completely differently and be disappointed or slightly sceptical about the below, but here is the comment: 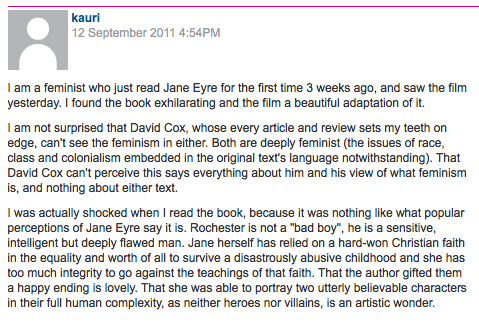