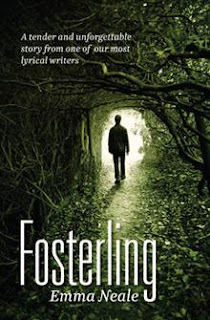 "A young man is found unconscious in a remote forest. He is over seven-feet tall, his skin covered in thick hair, which reminds onlookers of an animal's pelt. When he wakes in a city hospital, he is eerily uncommunicative.
"Speculation begins."

Fascinated by the myths of the yeti or the sasquatch, and the Maori near-equivalent of the maero, Emma Neale has written this novel, Fosterling. It explores the possibility of an outsider who stumbles into human society, and how humans will respond. Bu, the young man in question, has lived almost his entire life in the lush native forests of South Westland (New Zealand) with his parents, who hid from public view after bringing their adoptive son home from Nepal. Now, he arrives in the city of Dunedin, determined to learn about the world and about his own origins. Unsurprisingly, in the fashion of all classic outsider stories, he encounters difficulty after difficulty, and disappointment after disappointment.

I'm not surprised to learn, after reading the novel, that Emma Neale is a poet, because this book is written beautifully. Her writing style is very lyrical, very flowing, even as it is easy to read. It never jars and it is not at all laboured - no one phrase sticks out disproportionately, but all the sentences come together as a whole that is obviously lovely. It's a gift that can't be taught, I think. And she has it.

I liked the possibilities Neale discusses. I like the way she shows up the problems with our own society or the potential problems of shielding children too much, without ever saying these things out loud or giving easy answers. Her main characters tend to be quite vivid, larger than life, and easy to imagine.

Despite all these strengths, however, something didn't click for me. And it's hard to explain why, because so many of the components of this novel are right on target. Here are some ideas, though.

- The story switches between narrators every few pages. Much of the time it is Bu, and secondary characters, and then sometimes it is an entirely new character who we will never see again. I can certainly understand why Neale has chosen to write the novel this way. If it were all written in third person narrative, we wouldn't get glimpses into Bu's mind in such an immediate way. But if it were all written in Bu's perspective, we wouldn't understand how he appears to other people. So it seems an obvious choice to change narrators reasonably often.

This approach can work. It's a standard tool of classic Victorian authors like Bram Stoker or Wilkie Collins. However, for me, in this novel, it created a disjointed, jumpy feeling, which was especially evident in the ending. Despite the flowing prose, the plot and the structure did not flow well.

Anyway, in the end, although I think this is a novel that is worth reading, for its prose, for its characters, for its ideas, it is not entirely successful in the end. I am a little bit sad about this, because it seemed so promising. So I have given it two and a half stars.
Posted by Allie at 10:29 AM

Email ThisBlogThis!Share to TwitterShare to FacebookShare to Pinterest
Labels: new releases, New Zealand writers, two and a half stars