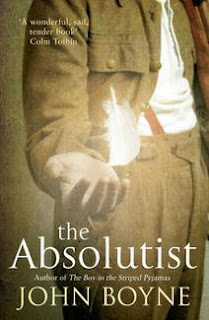 My grandfather was a conscientious objector in the time of the First World War. He refused to take up arms, but agreed to support the troops, and so he went to France with the New Zealand forces as a medic, and he was wounded at Bapaume, in the battle of the Somme. He didn't really like to talk about it. One of the only things my dad remembers him saying is that he once saw an Allied solider shot for desertion. And that when he got home to New Zealand he went up to the Port Hills, sat on a special seat that had been erected in honour of the soldiers from his childhood school, and cried, because he was the only one of his school friends who had survived the war.

And so John Boyne's new novel, The Absolutist, holds a certain interest for me.

The novel is narrated by Tristan Sadler, a young man who survived the WWI trenches but whose friend Will Bancroft was shot as a traitor when he laid down his arms and declared that he could no longer be a part of the war effort.

Tristan, now twenty years old and living in England again after his return from the war, visits the town of Norwich to meet Will's sister, who grieves for a brother whom her town remembers only with scorn for his 'cowardice'. Tristan grieves for Will too, for the friend who was secretly much more than a friend, while he holds a different secret, a secret of his own actions on the battlefield which will haunt him for the rest of his life.

Tristan's flashbacks to the trenches are rather well done. Of course, in theory, you know that it was horrible. You've been told about the people dropping like flies around each soldier, and the meaninglessness of each advance, and the mud, rats, lice, and gore. But this novel certainly provides you with some moments of insight, knowledge that hasn't quite sunk in or stayed sunken in.

The crisis point for Will Bancroft, the moment of clarity for him, is very, very intense for the reader despite the simplicity of Boyne's writing style. I think John Boyne has done pretty well at describing quite fairly the range of people involved in the war and the effect it must have had on many soldiers - although, of course, how can anyone really know what it was like except the people to whom it happened?

The story of Tristan's past is almost as painful. His family's rejection of him at age fifteen after they discover one of his secrets ... well, it's just horrific. I would like to say the world has come a long way, but I know this still happens.

Despite the strengths of this novel, however, I cannot enthuse over some major elements of it. Roughly half of the book is taken up by the events and discussion of a single day in Norwich, with Will's sister Marian, and to me it feels rather amateur in comparison to the rest of the book. Marian came across as very clichéd to me. She was such a mass of overwrought dialogue that I just couldn't get a clear idea of her as I read. Maybe Boyne is not so good at writing in the past tense he uses here? Perhaps his simplistic language is better suited to description than to records of long conversations? I am unsure.

Also, the deep dark secret Tristan has hidden from everyone, even the reader for most of the novel, did not really work for me. It felt like this plot was trying to be Atonement, on top of being a story of sexuality and a story of conscientious objectors and a story of families and so on and so forth. Perhaps it was just too much at the same time. Again, I am unsure.

So for me this was a very interesting read with some strong redeeming features, but it was also confusing to me - the quality was so variable. About two thirds of the time, I wanted to read it; the rest of the time I had to force myself through. So from me it's two and a half stars.
Posted by Allie at 11:05 PM

Email ThisBlogThis!Share to TwitterShare to FacebookShare to Pinterest
Labels: new releases, two and a half stars