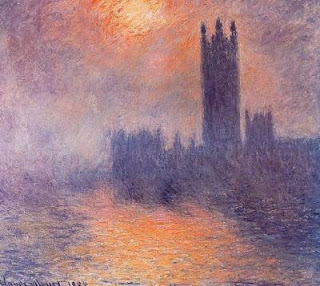 [via]
I've been missing London recently. I was there for a sum total of about six weeks in August-September 2009 - an unimpressive period of time - and yet I can still claim to miss the place. It must have imprinted itself on me.

While I was there, I absolutely loved the sensation of walking down a street and stumbling across proof that yet another cultural icon existed or was written about Here - whether it was wandering past Baker Street accidentally, or purposefully visiting a place like Handel's old house or the treasure trove of manuscripts at the British Library.

I sort of wish I had thought through exactly what I wanted to see a little more. I did very little conscious tourism. I knew that I wanted to visit the National Gallery, and Highgate Cemetery. I also knew I wanted to see a play at the Globe, and never got around to it. Everything else was an accident, or planned on the day it happened because I felt like it. Perhaps if I had made a detailed plan before I left New Zealand, I would have seen a lot more. Then again, I rather liked that everything just appeared in front of me - almost as if it were a mistake.

Now that I'm back, the reverse is happening. I'm stumbling over London in the cultural greats, and I think this is what has brought on my London-sickness.

Jane Austen on London, in a letter to her sister:

Here I am once more in this scene of dissipation and vice, and I begin already to find my morals corrupted.

'These friends' - and he laid his hand on some of the books - 'have been good friends to me, and for some years past, ever since I had the idea of going to London, have given me many, many hours of pleasure. Through them I have come to know your great England; and to know her is to love her. I long to go through the crowded streets of your mighty London, to be in the midst of the whirl and rush of humanity, to share its life, its change, its death, and all that makes it what it is.'

I love the creepiness of this seemingly sentimental statement coming from someone who likes to attack people and drink their blood, for goodness' sake.

It was a foggy day in London, and the fog was heavy and dark. Animate London, with smarting eyes and irritated lungs, was blinking, wheezing, and choking; inanimate London was a sooty spectre, divided in purpose between being visible and invisible, and so being wholly neither.

OK, so I googled that quote. I've always found it difficult to get through Dickens novels. Having said that, I am intending to read Oliver Twist soon because I feel that I should give Dickens another chance.

And, of course, some Conan Doyle:

It was a September evening, and not yet seven o'clock, but the day had been a dreary one, and a dense drizzly fog lay low upon the great city. Mud-colored clouds drooped sadly over the muddy streets. Down the Strand the lamps were but misty splotches of diffused light which threw a feeble circular glimmer upon the slimy pavement. The yellow glare from the shop-windows streamed out into the steamy, vaporous air, and threw a murky, shifting radiance across the crowded thoroughfare. There was, to my mind, something eerie and ghost-like in the endless procession of faces which flitted across these narrow bars of light,--sad faces and glad, haggard and merry. Like all human kind, they flitted from the gloom into the light, and so back into the gloom once more.

'It is my belief, Watson, founded upon my experience, that the lowest and vilest alleys in London do not present a more dreadful record of sin than does the smiling and beautiful countryside.'

I had neither kith nor kin in England, and was therefore as free as air -- or as free as an income of eleven shillings and sixpence a day will permit a man to be. Under such circumstances, I naturally gravitated to London, that great cesspool into which all the loungers and idlers of the Empire are irresistibly drained.

It's odd that these quotes which, for the most part, are rather unflattering should make me feel so sad to not be in London.
Posted by Allie at 8:49 PM

Email ThisBlogThis!Share to TwitterShare to FacebookShare to Pinterest
Labels: quotating