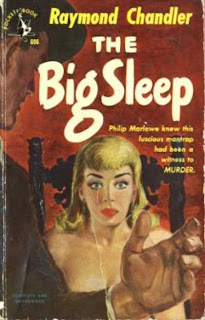 I am going to fall far short of reviewing Raymond Chandler's The Big Sleep appropriately. I simply can't bring myself to even attempt to describe it in its own terms. It's probably better that I don't try. Here is your review, written by a middle-class New Zealand ex-English literature student who has finished everything Agatha Christie or Ngaio Marsh ever wrote and so needed some new crime fiction addiction - and got something worlds apart from Miss Marple.

I saw the Bogart film a few years ago - liked it but can hardly remember what happened, which was good in terms of reading the novel with an open mind.

As far as the novel goes, I wondered as I started if I would be able to keep going. It's written very simply and in a matter of fact manner which is difficult to get accustomed to:

I went over to the mail slot and picked up six envelopes, two letters and four pieces of advertising matter. I hung my hat on the telephone and sat down.

But then there are all the crazy similes and personification and turns of phrase, the proliferation of guns and gutter-dwellers, the underbelly of society presented on the page, and it gets interesting:

She approached me with enough sex appeal to stampede a businessman's lunch.

The air was thick, wet, steamy and larded with the cloying smell of tropical orchids in bloom. ... They smelled as overpowering as boiling alcohol under a blanket.

The calves were beautiful, the ankles long and slim and with enough melodic line for a tone poem.

She gave me one of those smiles the lips have forgotten before they reach the eyes.

Brody's dark brown stare moved up and down my face. His Colt went on hungering for my vital organs.

... against a scribbled wall a pouch of ringed rubber had fallen and not been disturbed.

"Eddie Mars had Regan bumped off," he said calmly, and leaned back as if he had just been made a vice-president.

The purring voice had an edge, like sand in the bearings.

"You'll tell me, little man. Here, or in the back room where the boys pitch dimes against the wall."

Then there's the private detective/street talk which much of the time was incomprehensible to me but worked all the same:

"Agnes is a nice girl. You can't hold that stuff on her. It's not so easy for a dame to get by these days."
"She's too big for you," I said. "She'll roll on you and smother you."
"That's kind of a dirty crack, brother," he said with something that was near enough to dignity to make me stare at him.
I said: "You're right. I've been meeting the wrong kind of people lately. Let's cut out the gabble and get down to cases. What have you got for the money?"

Did people ever actually talk like this? I almost hope so.

What bugged me about this novel, however, was Chandler's treatment both of homosexuals and women. I'm sure this is not an original complaint to make, because it's so pronounced a quality of this book. It kind of reminded me of Ian Fleming's treatment of women.

You can have a hangover from other things than alcohol. I had one from women. Women made me sick.

Well, excuse me, Mr Chandler, none of the men in your novel are glittering testimonies to mankind either. And don't even get me started on your repulsive characterisation of the homosexual kid.

It doesn't really have a strong plot, either, and was a little confusing to follow. Especially as it's difficult to understand what the heck the characters are talking about.

I can't deny this, though: the book is fun. I'm not sorry to have read it. There was something deliciously sordid about it. It deserves at least three stars.
Posted by Allie at 5:46 PM