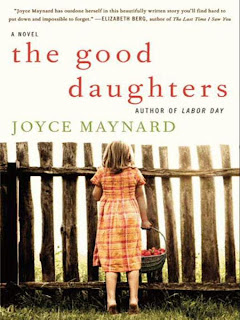 The Good Daughters, by Joyce Maynard, is a story of two girls from New Hampshire who were born on the same day to very different families - 'birthday sisters', says one of their mothers. The book follows Ruth Plank, the daughter of a farmer, and Dana Dickerson, daughter of an artist and an unreliable optimist, through their lives and through their relationships, which diverge, intertwine, back and forth. They are very different women, but they share a sense of displacement in their families. This book chronicles their gradual journey to an understanding of their roots.

Warning: This review will not contain spoilers, but it necessarily hints at the direction of the novel.

This is a very readable book. It's written fluently and well. It is nice, unpretentious writing. It has no moments of brilliance, to be honest, but perhaps more importantly, it doesn't have any moments that grind against the reader's ears. The story switches between its two narrators often, and builds up some momentum, giving it a pace that is easy to get caught up in. It is the sort of book which could be a good beach-read for many, many people. It's not a BAD book, and for this reason, I don't want to be too mean...

I just didn't really enjoy it. I wish I could say that I did, but it never really grabbed me.

These are the reasons:

1. The story meanders along through fifty or sixty years of Ruth and Dana's lives, working itself slowly towards a big, shocking denouément which would be completely satisfactory - if it weren't for the fact that it was obvious right from the beginning of the novel what the shocking hidden truth is.
It's probable that Maynard intended this. I can recognise that. But I still think this doesn't work well. The foreshadowing is too overwhelming; there is nothing to look forward to.

2. For some reason, Ruth was much more interesting as a narrator than Dana. I feel that this shouldn't be the case, when the narration is shared between them equally.

3. The ending, after the denouément, seems way too neat, and so it is a little disappointing after all the untidiness of their lives up to that point.

4. Sex, or coming to terms with sexuality, is a constant feature of the novel, but it mostly seems to feature in a very derivative way. There were a couple of lines in particular which, unfortunately, made me giggle, because they were so similar to Mills and Boon. I don't think that was the effect she was going for.

5. A large number of the characters are irreparably tainted by cliché. Including the narrators, especially Dana.

6. Finally, as a reader who has grown up in a complicated family and knows that blood ties aren't always the be-all-and-end-all of getting along together or loving each other, I couldn't help being annoyed by the implications of Maynard's presentation of the two families in the story. I can't say more without ruining the plot, but I wish she had thought through the relationships she writes about a little more carefully. They didn't need to be so black and white.

To sum up - this is not a bad book. I think a lot of people would enjoy it. If you enjoy Jodi Picoult or writers like her, you would probably like this. I just can't summon up any enthusiasm about it myself. My verdict: one and a half stars.
Posted by Allie at 11:43 AM

Email ThisBlogThis!Share to TwitterShare to FacebookShare to Pinterest
Labels: new releases, one and a half stars