his family ... and other animals 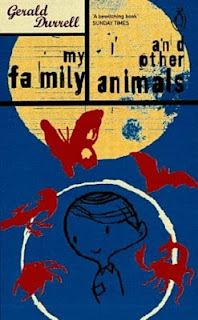 I have just finished reading Gerald Durrell's My Family and Other Animals. It's one of those books that I'm delighted to discover now, but really should have come across earlier. Has anyone else coming across this blog read it?

Gerald Durrell was an English (though Indian-born) naturalist and conservationist who also wrote books about his exploits. I've never even considered reading books about animals before, but that was before I realised how much fruit for story-telling they provided him. This particular book is about the five years he spent with his slightly unconventional family on the Greek island of Corfu in the 1930s, from the age of ten.

It feels like cheating to be able to write a book about your childhood years in Corfu, in a way. Durrell has so much to work with, simply by virtue of living in an absolutely beautiful location, with fascinating wildlife, and interesting people. It also feels like cheating to have such a wonderfully eclectic family, and to have such serendipity in encountering the most unusual variety of people outside the family. But at the same time I get the distinctive idea that Durrell is one of those people who could find interesting things anywhere, and, even if they happen to be swamp-delling reptiles or generous wife-killers, endear them to all his readers.

I laughed out loud for a high percentage of this book. It's full of hilarious moments, brought to the page either by Durrell's family/friends or by animals or by Durrell's family's encounters with his animals. When I wasn't giggling, I was fascinated by the wildlife a teenaged Durrell dug up in various swamps or stumps or seas. Or I was bowled over by his descriptions of Corfu. One particular image stands out: swimming in the sea, at night, with porpoises - the sea so full of phosphoresence that the porpoises shone as they swum underneath or beside him, and the water they splashed sparkling like little diamonds.

I did get bogged down a bit in the descriptive passages at times. But as a whole this book is something lovely to read. A slice of chocolate cake, as books go. I give it three and a half stars.
Posted by Allie at 9:25 AM

Email ThisBlogThis!Share to TwitterShare to FacebookShare to Pinterest
Labels: 20th century, classics, three and a half stars